Balmoral is a small community in the Rural Municipality of Rockwood. In the early 1870’s, people settled in the area that is now called Balmoral. In 1898, the Canadian Pacific Railway came through. The Northern Elevator Company erected a grain elevator turning Balmoral into a thriving agricultural Community.

The first settlers came to this district in 1872, soon after the transfer of Rupert’s Land from the Hudson Bay Company to the Dominion of Canada in 1870. Although at first a nameless gathering of homes and businesses, when the school district organized in 1875, the school was named Balmoral after the castle in Scotland. A few years later, the post office was given the same name and as they say the rest is history.

Founded on solid rock, Balmoral is still today primarily a farm community. Although the methods of farming have changed from oxen driven to huge tractors and combines, etc. the produce and livestock remain the same high quality due to the time , energy and skills of our local farming families.

Balmoral was built up around Jackfish Creek and despite the many jokes about its “mighty waters”, an old edition of the Argus tells of its popularity as a bathing site and the many Jackfish fish caught from its banks. The sandbaggers in 1996, 2005 and 2009 will attest to how “mighty” it can be. Industry and business in Balmoral has been very diverse. There has been trucking, a hotel, a bank, blacksmith shops, a sawmill, a flour mill, a lumberyard, a livery stable, Balmoral Brick Company, stores, a hardware, a confectionery, snack shops, garages, an insurance agency, a funeral business, veterinarians, a community centre, churches, a post office, a curling rink, a seniors residence and even a brass band.

The Canadian Pacific  Railway came to Balmoral in 1898 with stockyards and a platform for heavy freight. Six times a week, the passenger train arrived with milk and cream, mail and supplies. Three times a week the freight train brought in a great variety of goods. Balmoral shipped out grain, livestock, cordwood and lumber. Today trucking has taken over most of this freight hauling. The first elevator was built in 1898 by Northern Elevator Co. and was later purchased by Paterson Grain Co. The capacity of 30,000 bushels went to 60,000 bushels when the annex was added in the 1940s. A 15,000 steel annex was added in 1969. Over the years the elevator operators have sold coal, twine and fertilizer. Sadly, the elevator was torn down in 2003 and the landscape of Balmoral was greatly changed. 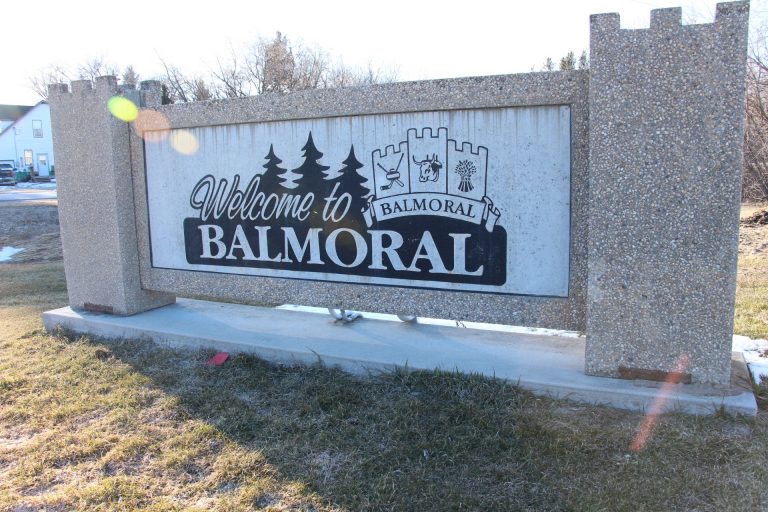